Flying Squirrels ​in the Attic

Flying squirrels? Do we have those here?
We sure do. The southern flying squirrel is often referred to as the most common mammal no one in North Carolina knows about! The main reason you don’t see them is that they’re nocturnal, meaning they’re only active at night. They spend the majority of their time high up in the tree canopy. They are also much smaller and quieter than grey squirrels as well as solitary much of the year. You might hear a rustling in the trees. You might see something move but never catch a clear sight of one. Like the grey squirrel, they love bird seed! If you spot one, it may be at the bird feeder after dark. They will also take up residence in bird houses. Flying squirrels are omnivores, eating acorns, mushrooms, fruits, flowers, and even animal carcasses, bird eggs and hatchlings.


Wintering colonies
In colder months, flying squirrels form wintering colonies in tree cavities. They still move around, forage, and relieve themselves but activity is reduced as they spend time huddling together during lower temperatures. They’re adapted well to urban and rural human-inhabited areas,  often choosing attics to winter in instead of trees. Up to 50 animals can be found in one wintering colony, though the number is commonly around 25.


What is making noise in my attic? Is there wildlife in my attic?
If you hear intermittent scratching, scampering, or something that sounds like an acorn dropping or rolling around, it’s likely an animal. We can come out for assessment to see what kind of animal and how best to get them out and keep them out. One of the common animals that take up residence in attics is flying squirrels.


How do I get flying squirrels out of my attic?
Animals have a wide array of options when it comes to excavating or simply slip into an attic. After we have noted all wildlife activity, primary access points, and secondary vulnerabilities during assessment, we’ll provide a detailed estimate for how to get them out. First, we remove the animals by installing one-way devices and setting live traps. Then we seal access points, repair any damage, remediate if necessary, and install preventatives for future entry. If you decide to go with DIY or a handyman not specific experienced with wildlife, you want to make sure the animals are out! The work you do could be chewed right through, a desperate animal could excavate a new area to get out, or a mother could excavate a new place to get in to her trapped young. Then you have holes and flying squirrels again. Another potential is that the animals eventually die in the ceiling or walls. This is not a humane option. We will ensure all animals are out!

​
The flying squirrel’s patagium
The what now? Flying squirrels have a flap of skin that stretches from the wrists to the ankles and is called the patagium, patagia plural. When an individual extends their front and hind legs, the patagium acts like a parachute, allowing them to glide farther when jumping from tree to tree. 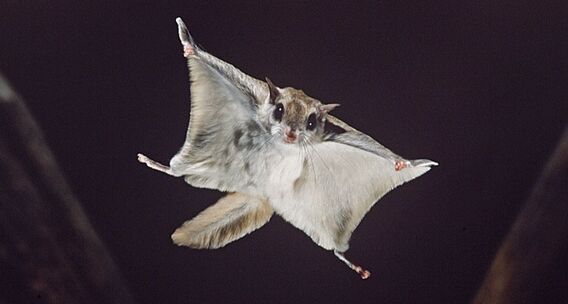 Read more about the patagium

​What's in your attic? ℠
Just call. We will restore peace and harmony.